Women are mobilizing to march on Washington this month. These women will demonstrate against the prevailing political rhetoric by marching alongside a million others who have been intimidated, threatened and marginalized. And I will be among them. I march as a woman defending human rights. I march as a lesbian fighting -isms and -phobias. I march as a feminist confronting inequality. I’d been reeling from the recent election when I was given the rare opportunity to volunteer my professional skills to strengthen the visibility of this movement by contributing to the design campaign. I’m absolutely proud to have created the official Women’s March logo that conveys diversity and women standing together and speaking out in a united voice—a voice that calls for solidarity, demands equality and confronts injustice.

When the Women’s March grew from a single event into a movement, the organizers realized that they needed an icon to represent and embody the defenders of human rights. Teresa Herd, VP, Global Creative Director for Intel, and Amy Stellhorn, founder and CEO of Big Monocle, championed and mobilized an incredible team of creatives – all women’s rights allies – to volunteer their support. The team, including Wolfgang Strack of Strack Design, concepted and produced numerous variants—hundreds of social media icons, march banners, flags and posters.

In addition to the logo I was delighted to create several hand lettered designs featuring feminist maxims, rounding out the design of the campaign merchandise. Girl Almighty! The Future is Female! I Fight Like A Girl! Wild Feminist! I hope the women who see this logo, wear these shirts, carry these bags, wave these flags and bear these pins will be greatly empowered.

On January 21st, we will rise. 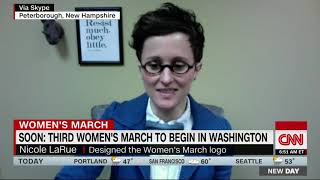 A Collaboration with Chatbooks!

Tattly partnered with The Women's March!

My cards now at Oblation Papers!